We, meat eaters, like meat and meat products, unlike vegetarians. We love it boiled, fried, baked, stewed, in the form of cutlets, sausages, kebab, stuffing in dumplings, pancakes and so on. I’m afraid I haven’t mentioned all the dishes with meat, but, I think, you will agree that it is really tasty in all its manifestations.

Can you answer a question – Is meat healthy or still harmful? Probably, many people since their childhood know that meat is a protein product, which is important for a human body and contains different amino acids that can not be found in other kinds of food. The scientists have proved that structure of the protein is similar to the structure of the human protein, so it absorbed well; it also contains many vitamins and minerals that are very useful at anemia, especially beef and chicken, which contains a lot of iron, calcium, magnesium, phosphorus, sulfur, iodine, sodium, manganese. «Meat» vitamins – vitamin A, E, D, B. 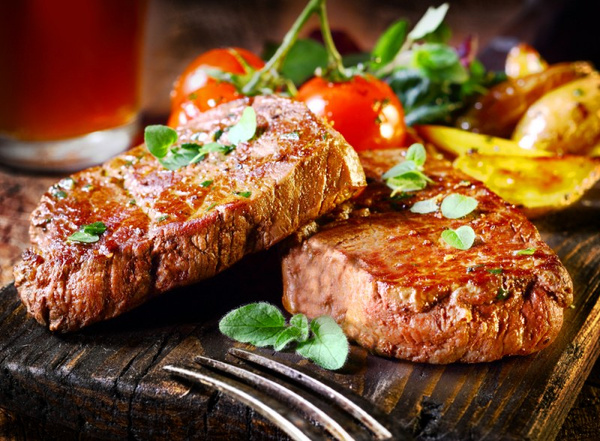 Before cooking meat, you should know that animal fat is harmful for our body, a lot of poisonous substances are emitted there. We shouldn’t eat meat very often, because it is heavily digested.

Such methods of cooking, as frying are not only useful, but also are harmful. Therefore, if you want to eat healthy food, it will be more useful if you boil it or stew.

Of course, we, meat consumers, should buy meat of good quality, it should be from lightly pink to reddish, slightly elastic, and should not have pungent smell.

Every person make its own choise – to eat meat or not. If you refuse eating meat, then you must focus on protein-rich vegetable food. Bon appetit! Be healthy!